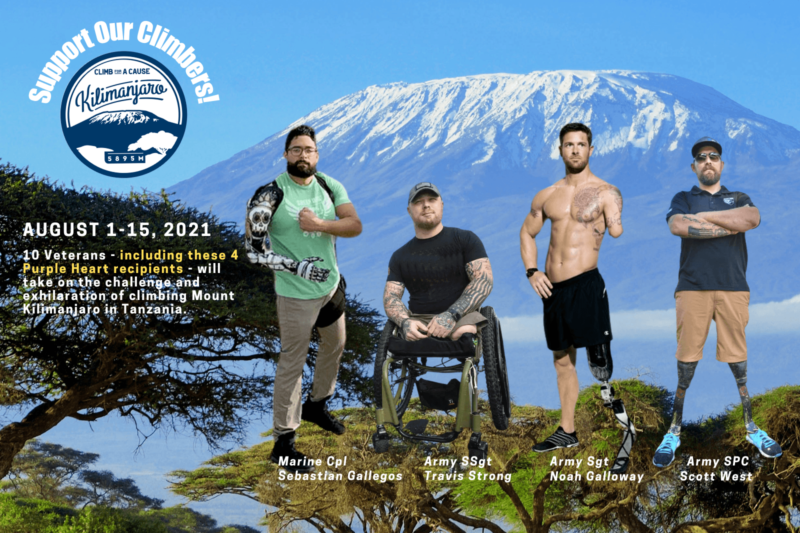 KILI CLIMB FOR A CAUSE

Sheep Dog Impact Assistance (SDIA) is honored to be part of Sam’s Furniture‘s Kilimanjaro Climb for a Cause happening in August.

The “Kili Climb for a Cause” climbing team, sponsored by Sam’s Furniture in Springdale, Arkansas, includes owners, Joe & Larra Donaldson, a video production team, and ten Veterans – four of which are Purple Heart recipients (single- and double-limb amputees).

This adventure was featured on the March 1, 2020, Fox & Friends show and was originally scheduled for July 2020. Due to the COVID-19 pandemic, it was rescheduled for August 2021.

WHY ARE WE CLIMBING?

The Kilimanjaro Climb for a Cause was created to inspire all individuals to face challenges head-on and work to overcome them. Summiting Kilimanjaro is a huge undertaking and accomplishment for a person without physical injuries to deal with. For those like our Purple Heart recipients who have suffered limb loss while serving our country, the challenge rises exponentially. But they will face this challenge as they have every other challenge set before them – with grit, determination and heart.

Through this climb, we want to show the world that you can accomplish anything. It is a demonstration of will, an example to all people that you should never give up on your dreams. That no matter the challenge in your life, don’t stop challenging yourself and living your best life. #StruggleWell #NoExcuses

As we are sure you can imagine, an adventure of this significance will take a lot of funding and logistics to be successful. While we are extremely grateful for the generosity of the Donaldsons, we invite YOU to support our climbers, too!

What an incredible opportunity this is. Imagine knowing the honor and pride you’ll feel as you follow along their journey to summit Mt. Kilimanjaro, and being able to say you played a part in getting them there!

There are three ways you can support these heroes.

This epic adventure will be highly promoted leading up to, during and after the trip. It will be documented from start to finish, and sponsors will be highlighted throughout the promotions and film.

We would love for you and/or your company to be one of these featured sponsors.

If you are able to help by donating and/or by Sponsorship, please contact Michael Nimmo at 479-841-6589 or MNimmo@SheepDogIA.org.

Who Are Our Climbers?

You can read about all the Climbers on the Kili Climb for a Cause website or Facebook page; the four Purple Heart Recipients that are climbing are Cpl Sebastian Gallegos, Sgt Noah Galloway, SSgt Travis Strong, and SPC Scott West.

About the Climb and Mt Kilimanjaro

Reaching 19,342 ft in elevation, Kilimanjaro is the highest mountain in Africa and the world’s largest free-standing mountain. It is comprised of three volcanic cones – Mawenzi (extinct), Shira (extinct) and Kibo (dormant). The highest point on Kibo’s crater rim is called Uhuru, the Swahili word for “freedom.”

The group will be climbing the 70 km/42 mile, 7-day Lemosho Route, which starts in lush, fertile rain forest. It is the first of four ecological zones encountered on Kilimanjaro. The route heads up and across the Shira Plateau, then turns north to Moir Hut. Next, they will climb high up and over Lava Tower before dropping into Barranco Valley, one of the prettiest areas on the entire trail. Then they will face the intimidating Barranco Wall, and circle along the southern circuit to Karanga and high camp Barafu Hut. The summit attempt to Uhuru is made from Barafu in the early morning hours, often during the full moon. This is the coldest, windiest section on the trail, but once the sun comes up, temperatures are more comfortable. After the summit, the descent follows the Mweka trail.