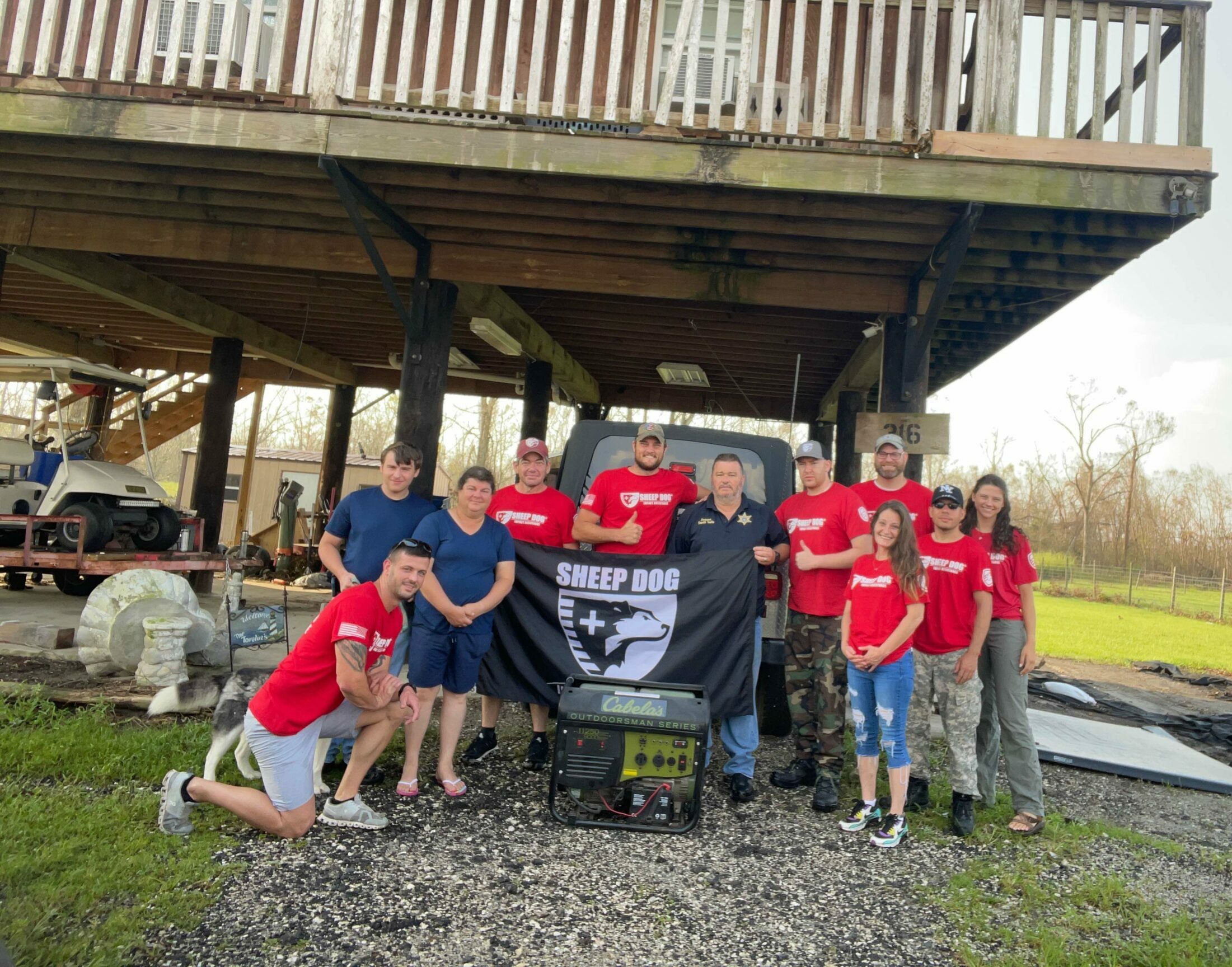 Sheep Dog Impact Assistance (SDIA) and our Disaster Response (DR) Teams have helped many people during our missions following natural disasters. As we assist those affected, we hear their stories, see their pain, and are blessed to have helped them begin to recover in some small way.

During our Hurricane Ida DR mission September 1-10, 236 SDIA Members and Volunteers deployed to the Houma, Louisiana, area for ten days. They cleared 190 trees, tarped 127 structures, delivered 18,597 lbs of water & food and 1,670 lbs of supplies, and assisted more than 3,413 people. On this particular mission, the DR team prioritized helping local First Responders – 550 of them! Many had damage to their homes, but were unable to take care of it because they were out helping their fellow residents. With SDIA attending to their property, those Sheep Dogs could focus on their work knowing their own families were taken care of.

One First Responder that was assisted during our first deployment to Louisiana is Lt. Don Tomlin of the Terrebonne Parish Sheriff’s Office. His story echoes what so many have been or are going through. We thank him for sharing it and for allowing us to assist him and his family.

In 1996, Don began working for the Terrebonne Parish Sheriff’s Office at the jail and worked his way up to the detective bureau after a short time in patrol. He has been a detective for 19 years.

May 26, 2020, Don felt sick and stayed home from work. Four days later he tested positive for Covid, and on June 2 he was rushed to the hospital via ambulance with double pneumonia. Doctors told Don’s wife that if they had waited just one more hour to call for help, Don would have died.

He was placed in the Critical Care Unit and after two days they considered putting him on a ventilator but decided to wait to see if the meds would work. They did, and six days after entering the hospital he was transferred to a Covid floor, across the hall from his wife who had been admitted that day for Covid. After 10 days in the hospital, Don was released to go home, but his wife had to stay three more days. While home on his own and caring for his only son, he continued to have breathing issues and was on oxygen and breathing treatments.

While his lungs slowly improved, the breathing issues remained. Don then found out that Covid had damaged his heart. Doctors have been trying to fix the issue without surgery, but it looks like surgery is imminent.

Don has been on medical leave for over three months and cannot yet return to work.

As if recovering from Covid and battling heart & lung issues were not enough, Hurricane Ida hit Terrebonne Parish head on as a category 4 hurricane on July 29. Devastation was everywhere, including Don’s property where large trees were down and outbuildings destroyed, though his home thankfully suffered only minor damage. His utility services were ripped out of the ground, and like so many others down there he has no power or water, forcing Don and his family to evacuate and leave their home.

“Then I met a group of the greatest people,” Don said. “An organization called Sheep Dog Impact Assistance removed a very large tree which blocked access to my home allowing me to get to it and assess the damage. Then they left me with a generator that pretty much runs my whole house.”

“I was overwhelmed,” he continued. “Sheep Dog is a great organization, and I am lucky to have met these wonderful people. I will recover from this, but with their help it will be easier. Thank you to Sheep Dog Impact Assistance for all you do. God Speed!”

Don, we thank you for your service and sacrifice. All of us at SDIA also want to thank our generous donors and supporters like Cabela’s/Bass Pro Shop in Rogers AR who donated generators for us to leave with families affected by Hurricane Ida. We couldn’t accomplish our mission without your vital support.

For more photos of our DR mission to Houma, Louisiana, visit our Facebook album.

To support us financial so we are prepared for the next Disaster Response Mission, please consider a financial donation via our secure online Donation page.