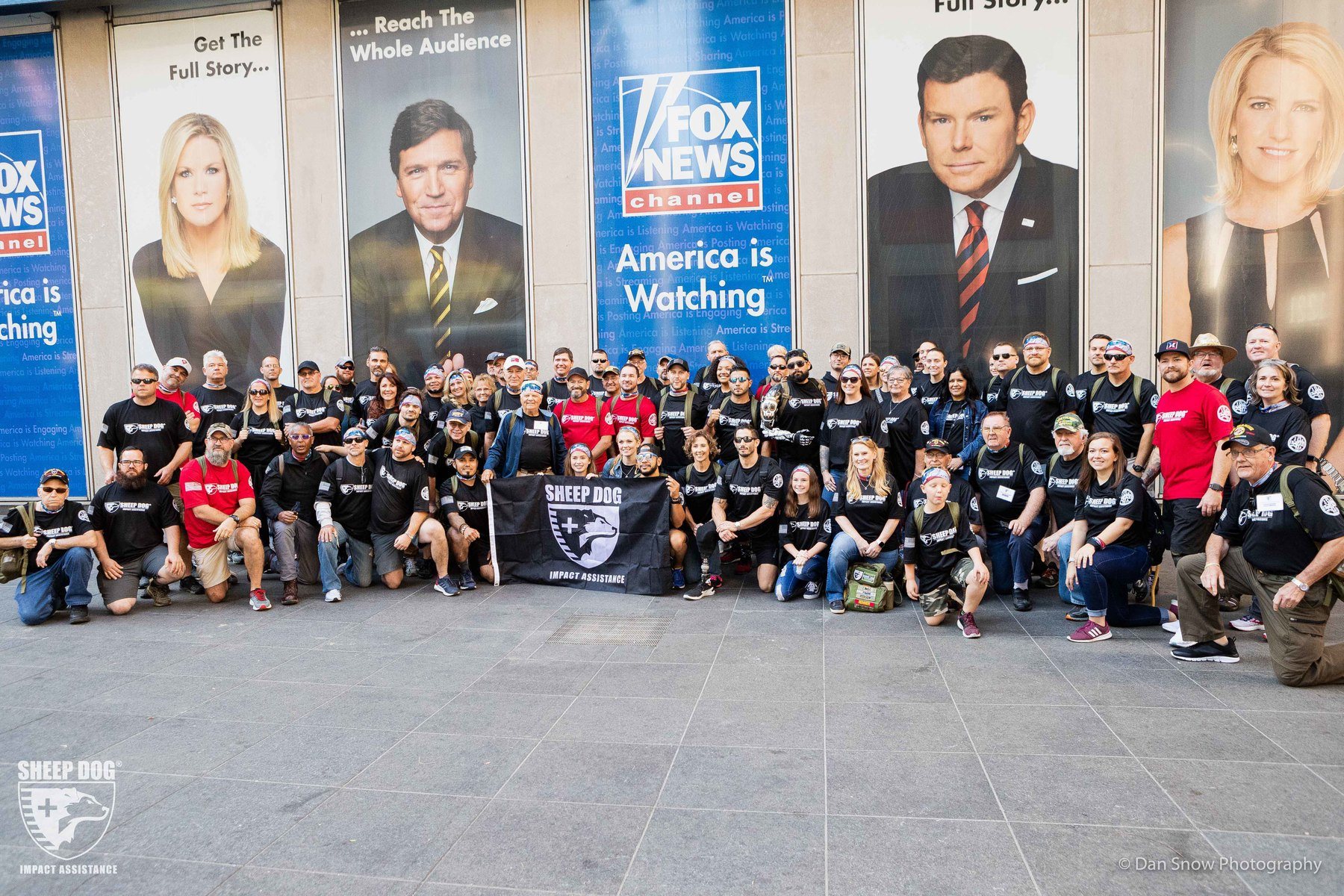 The last weekend in September 2019 was beautiful in New York City, and the nearly 90 Sheep Dog Impact Assistance (SDIA) Outdoor Adventurers filled their days with an appearance on Fox & Friends, tours, food, a 5K and the much-needed camaraderie of their fellow Sheep Dogs. This SDIA Outdoor Adventure centered on Ground Zero, the National September 11 Memorial & Museum, and the Stephen Siller Tunnel to Towers Foundation 5K because for many of the sponsored Sheep Dogs, their military and/or first responder professions began as a direct result of the 9/11 terrorist attacks. These sites were “bucket list” items for many, bringing them full circle, physically and emotionally.

“I feel like my military career and experiences came full circle. That everyone I know who is no longer here is commemorated every year at the very least. And that this organization is here to have your six and get you out there and pushing forward.”


This large group consisted mainly of service men and women in our Armed Forces and First Responder professions from different eras and diverse backgrounds, but all with the same willingness and innate desire to serve. SDIA partnered with Vet Centers to bring 25 combat-wounded veterans on this Outdoor Adventure, the final in a series of four contracted trips with them throughout 2019. In addition to those 25 were nearly 30 more sponsored Sheep Dogs, as well as their families, and SDIA members and staff. While some bear physical wounds or missing limbs that are easily seen, a majority of them suffer from traumatic brain injuries, chronic pain, post-traumatic stress and other ‘unseen’ injuries from their service. Being in NYC with their fellow Sheep Dogs provided the camaraderie and peer support they need but haven’t experienced since they served.

“The trip was great and I got much more than I expected. Since leaving the military last year, I have not felt connected to much of anything. And the trip gave me an opportunity to connect with my fellow service members once again.

“Being around other Sheep Dogs is what made the trip so special. Everyone there speaks the same unspoken language. The friendships I made in this trip will last a lifetime. It is also inspiring to see others overcome obstacles and excel – there is life beyond adversity and hardship.”

The adventure began early Friday morning, September 27, with the group appearing on popular morning show, Fox & Friends. SDIA founder and president, SgtMaj Lance Nutt. USMC (Ret.), vice president Kacey Wiltz (a Lawrence Kansas Police Officer), and Outdoor Adventure Coordinator, Army SPC Scott West, talked about SDIA’s mission to help fellow Sheep Dogs #GetOffTheCouch through their Disaster Response Mission and Outdoor Adventure programs, and how doing so gives these brave men and women a renewed sense of purpose, opportunities to continue serving, and the camaraderie and peer support they need. While they were talking with the hosts, 20 Sheep Dogs – wearing JUNK Brand headbands specifically designed for this event – ran a mini obstacle course constructed by Spartan for the segment, giving the world a glimpse into what Sheep Dogs experience when on an Outdoor Adventure with SDIA.

The big event – and challenge – for many came on Sunday in the annual Stephen Siller Tunnel to Towers Foundation 5K. The SDIA group was laughing and joking as they awaited the start of the race, but the smiles hid the underlying emotions each felt, remembering the shocking attacks on the Twin Towers, the loss of nearly 3,000 people, their own service to our country and communities, and the losses they suffered as a result. Today SDIA, wearing special ‘Never Forget’ JUNK Brand headbands, would walk the same path that Stephen Siller took as he donned 60 lbs of firefighting gear and ran from the Brooklyn Battery Tunnel to the Twin Towers, giving his life helping victims of the attacks.

Some of the Sheep Dogs, including a number of Vietnam veterans, had barely walked around their block at home, let alone walk a 5K (3.1 miles). Others had issues being in crowded places. Yet all accomplished the goal of finishing this race by walking side-by-side with their brothers and sisters, giving the support and encouragement needed along the way. They conquered this battle with their fellow Sheep Dogs, for their fallen brethren, for their country & communities, and for themselves.


“I definitely feel like I did something with Sheep Dog I would have never been able to do alone. I was surrounded by like-minded individuals with similar struggles and experiences, which pushed me to push myself.”

“The 5K was very eye opening. And I enjoyed seeing all of the first responders from all over the world at O’Hara’s afterwards. It made obvious the impact that day had on many countries not just us.”

“Meeting new people and sharing life experiences with them that they can relate to and seeing in their faces that we are of the same cloth. The process is very healing and cathartic.”

“It allowed for shared experiences and being able to talked about things you can’t talk about anywhere else. Healing occurs at Sheep Dog events.”

The rest of the weekend was filled with tourist attractions like the Empire State Building, Fire Station 54 and FDNY Ten House, O’Hara’s, Times Square, and Central Park. They also went on guided tours of Liberty Island/Statue of Liberty and Ellis Island, and Freedom Tower (officially named One World Trade Center), where they had an extraordinary opportunity. The group was brought up to the 70th floor, which is unfinished, and were invited to write messages on the concrete walls – giving these heroes a chance to memorialize those they had personally lost and leave a part of themselves behind as a legacy for those who will one day occupy this space on hallowed ground. Looking out the windows on the south side, they could see the 9/11 Memorials in the footprints of the original Twin Towers.

To see more photos from this incredible Outdoor Adventure, visit the Facebook Album.

This Outdoor Adventure could not have taken place without the hard work and support of SDIA’s staff, members, volunteers, donors and sponsors. Huge thanks to the sponsors of this event: Walmart, Disabled Veterans National Foundation (DVNF), JUNK Brands, Spectrum Brands, Equip Outdoors, US Dept of Veterans Affairs, Veterans United Foundation and Dare Devil Display Works.

To learn more about SDIA and their programs to engage, assist and empower our nation’s heroes – our Sheep Dogs – through Disaster Response Missions and Outdoor Adventures, visit their website (www.SheepDogIA.org) or social media platforms.